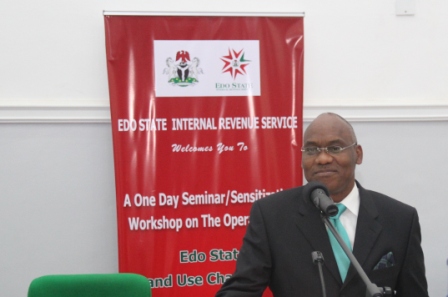 The Executive Chairman of the Edo State Internal Revenue Service, (EIRS), Chief (Sir) Oseni Elamah has reiterated that the state government would continue to do things that are right in the sight of the people and that it did not owe workers’ salaries.

Chief Elamah stated this during a one-day seminar/sensitization workshop on the operations of the Edo State Land Use charge Law held in Benin City.

In line with this philosophy, he disclosed that most states in Nigeria, excluding Edo owe workers salaries.

The revenue chief attributed the state government’s feat to its initiative/capacity to strategize and reorganize the Internally Generated Revenue (IGR) to be able to meet workers’ salaries.

He said that despite the monumental development currently going on as evident in the state-of-the-art Central Hospital, 2nd East Circular Road, underground drainages amongst others, the state government was able to pay workers salaries.

On the issue of Land Use Charge Law, the EIRS boss said that ensuring a conducive tax system, the agency had earlier undertaken a feasibility study to Lagos State.

He maintained that the idea was not only putting in place what obtained in Lagos, but to improve on it in a manner, that would guarantee an inclusive administration.

Chief Elamah averred that towards ensuring a participatory government, the state government set up a Tax Assessment Review Committee (TARC) with a view to entertaining tax related matters.

“This further ensured that what we do, there is transparency, accountability and fairness such that we create a tax friendly environment, stated the Executive Chairman.

According to him, to achieve that, the agency usually carries out tax seminars/sensitization where scholars on legal matters are invited to interpreter the law, especially on the Land Use Charge Law, with a view to optimizing the IGR.

The chairman of session, Hon. Justice J.I. Acha described the occasion as timely, adding that the dream of any nation is its quest to increase the internally generated revenue.

While emphasizing the importance of IGR, Justice Acha charged tax officials whom he described as foot soldiers to always carry out their operations within the ambit of the law.

Executive Director of EIRS, Barr. Emmanuel Usoh, Board member, Barr. Anthony Okungbowa and Mrs. Osaro Grace, however delivered lecture’s on the challenges of the Land Use Charge and the general overview/Implementation of the Edo State Land Use Charge Law 2012.