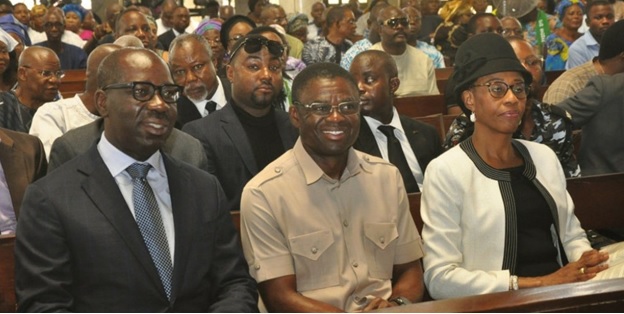 The Edo State Governor, Mr. Godwin Obaseki, has extolled the exemplary virtues of late Chief Sam Otaniyen Iredia, a former Chairman of the Edo State Internal Revenue Service (EIRS), praising his contribution to the development of the state.

Governor Obaseki spoke when he led members of the State Executive Council (EXCO), including the Deputy Governor, Rt. Hon.  Comrade Philip Shaibu; Secretary to the State Government, Osarodion Ogie Esq.; Chief of Staff, Taiwo Akerele, and the Solicitor General, Oluwole Iyamu, among others, to attend the vigil and funeral mass held in honour of late Iredia in Benin City.

Speaking to the congregation in a eulogy on the life of Sam Iredia, Obaseki said the former EIRS boss was among the very few people that built the Edo State that others are enjoying today.

“If you read his biography, you will see the link between what we are trying to do today as a government and what they did from 1979 to 1983 when they had the opportunity and privilege of being in government with late Prof. Ambrose Alli. All they did was to bring innovation and fundamental change to government.

“As Finance Commissioner, he proposed a N1billion deficit budget knowing that the naira would be devalued. He thought outside the box, did something unusual and that decision brought in more money for the state, which led to the building of the Ambrose Alli University, Ekpoma and College of Education, Abraka. He served this land and committed all he in developing the state.

“We thank the Iredia family for giving us someone like him; we will miss him. We thank him because he made his mark,” the governor added.

Delivering a homily at the funeral mass, Rev. Fr. Peter Oyase Oshomah, who spoke on the topic ‘the purpose of life’, called on Edo citizens to work together in unity for the development of the State.

The late Chief Sam Otaniyen Iredia, who died at the age of 72 years, was a onetime Commissioner for Finance under the late Ambrose Alli’s administration as well as Chief of staff to Governor Lucky Igbinedion.