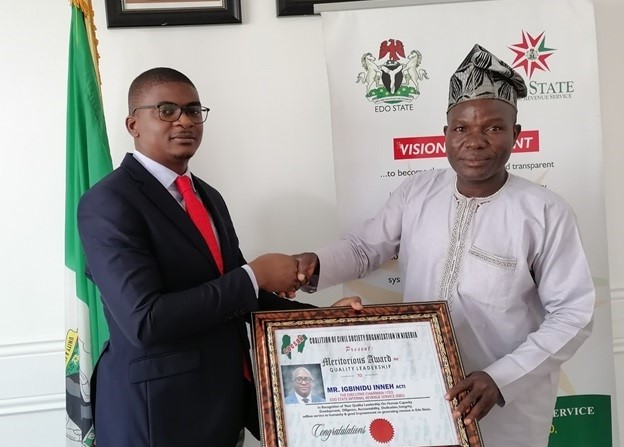 For his positive drive towards the improvement on revenue generation in Edo State, good track records and selfless service to humanity, Mr. Igbinidu Inneh has been presented with a meritorious award on quality leadership by a Coalition of Civil Society Organizations in Nigeria, an umbrella body of civil society groups from across the country involved in the promotion of democratic values and good governance in Nigeria.

Leading other team members for the formal presentation  held at the EIRS Corporate Head Office, the national Chairman of the coalition Comrade Olarewaju Peter, noted that “the award was in recognition of Mr. Inneh’s diligence, attested administrative skills and good quality leadership”.

He added, “that the revenue boss’ nomination for the prestigious award was as a result of his good track record and selfless service to humanity particularly in the areas of human capacity development, dedication, deligence, accountability, integrity, and improvement on revenue generation in Edo State.

Receiving the award on behalf of the Executive Chairman, and apprecting the coalition for the recognition, the EIRS Head of Corporate Communications, Eboigbe Courage, said the award would not have been possible but for the effective watchdog role played by members of the civil society which has led to beterring our democratic space and delivering good governance particularly in Edo State and Nigeria at large.

Eboigbe said further that the award is a moral booster for the EIRS boss, as it would spur him to continue to deliver on set target and mandate for the betterment of Edo people through effective revenue administration.