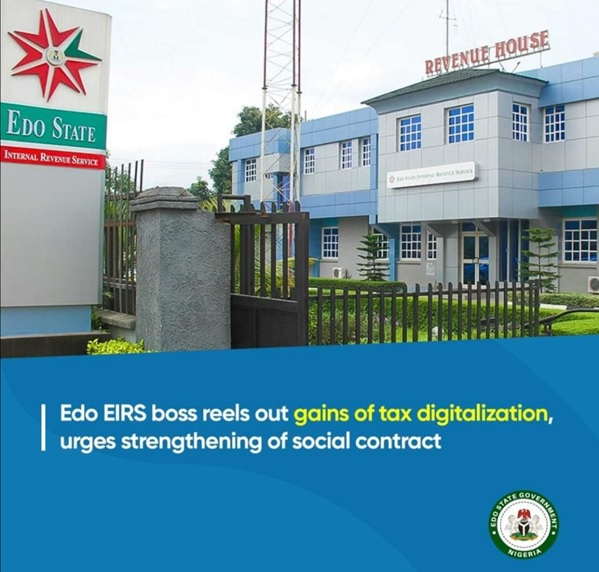 The Executive Chairman and Chief Executive Officer (CEO) of Edo State Internal Revenue Service (EIRS),Igbinidu Inneh has revealed that the State is deploying a technology-driven revenue collection scheme to boost its Internally Generated Revenue (IGR) and enhance payment convenience for citizens.Inneh who was a guest speaker at an event on technology and tax administration organized by theNigeria Governors’ Forum (NGF) said the State, through its technology-based Edo Revenue Administration System (ERAS), was taking the lead in tax digitalization in the country.The EIRS boss further urged other States to embrace the innovative technology-driven system to expand their tax net, gather more tax information and gain more insights into the tax and financial positions of taxpayers.

The event, which held virtually via Zoom, was aimed at supporting the scale up of modern, taxpayer-friendly and technology-driven revenue administrations in all States of the federation that will be capable of providing world-class services, characterized by efficient, paperless operations, and equipped with ICT-enabled risk-based enforcement to optimize revenue mobilization in the country.

He noted that ERAS is the innovation of the EIRS that “automates the entire process of Government Revenue Administration across all Revenue Streams and puts Edo State ahead in an emerging digital economy.”

He added that the State government, through the system has been able to tackle non-consolidated single database of taxpayers; non-reporting system on total assessments generated along revenue streams and inability to determine inactive tax payers and real potential for collection; real time reconciliation of payments to assessment items and revenue streams, making it difficult to track uncollected revenues; multiple settlement platforms (mostly over the bank counter transactions) and non-cash settlement especially for the informal sector.

The EIRS CEO said the State through the ERAS targets to get one million active taxpayers’ electronic profiles, raise personal income tax assessment for every profile, achieve a cashless collection of tax, deploy mobile technology to remote locations especially road taxes and block leakages through electronic treasury receipting and digitizing approvals, among others.

Noting the need to strengthen the fiscal social contract between the government and the people, Inneh stated: “In the face of the need to focus on growth of the non-oil revenues, there is the desire of States to grow their independent revenues. However, over the years, revenue collection drive has focused on increasing the number revenue items from the limited known number of persons as against expanding the tax net.

“There is therefore the need to be more engaging with the citizens through bi-directional impact to not only expand the tax net but to also change the narrative on multiple taxation. It is therefore imperative to engage in a series of initiatives to deliver value-for-tax in expanding the tax and revenue footprint particularly in the less-organized informal sector.”