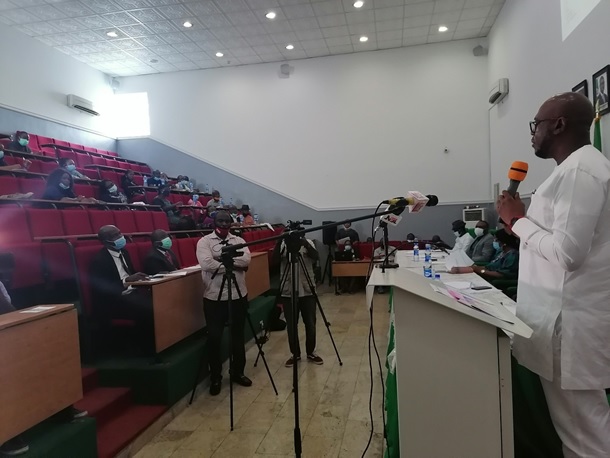 Keynote speaker and Secretary, Edo State Government, Barr. Osarodion Ogie, represented by Permanent Secretary, Office of the SSG, Barr. Deborah Enakhimion noted that the theme for this auspicious meeting, “Optimising IGR:The critical role of MDA services,” was timely and a task that must be carried out to eradicate multiple taxation which provided room for businesses to thrive through laid down rules.

Maintaining that the administration of Governor Godwin Obaseki was ever determined to provide the enabling environment for all MDA’s in the state to thrive in the discharge of their duties, Barr. Ogie stated that the interactive  session, first of its kind, was meant to create, “A stable environment to deliberate on issues affecting revenue generation in the state.”

He put forward, “As we are all aware, there are certain elements militating against revenue generation in the state. These activities stem from the actions of destructive elements who do not mean well for the development of our dear state and their action has led to loss of revenue for our state.

“Permit me to restate the determination of this present administration at ensuring the spread of the dividends of democracy to the good people of Edo state. This responsibility can only be discharged by corresponding funding through a synergized revenue generation system…”

Executive Chairman EIRS, Mr. Igbinidu Inneh while interfacing with the critical MDA stakeholders at mapping out a synchronized digital revenue template to strengthen  Edo state revenue base across its eighteen local government areas, insisted on the use of data capture and electronic transfer of funds for enhanced service delivery to citizens.

Elaborating, he said the process would be seamless and grow revenue due to institutional reforms, use of technology, creation of new revenue streams, investing in data gathering, aggregate small businesses with due partnership with the state government.

EIRS Executive Director, Ministries Departments and Agencies Services (MDAS) Mr. Osahon Imaru voicing on the need for the meeting, stated that it was geared towards eradicating people working in isolation and in silos hence the need to learn how to work together in all sense of sincerity to optimize revenue. Special attention he insisted would be given to raised problems/setbacks and finalizing means to solve these by government.

Some participants drawn from the State’s MDAs lamented the lack of tools to carry out assigned roles as challenge and suggested areas where government needs to step in for optimum service delivery during the question and answer session.