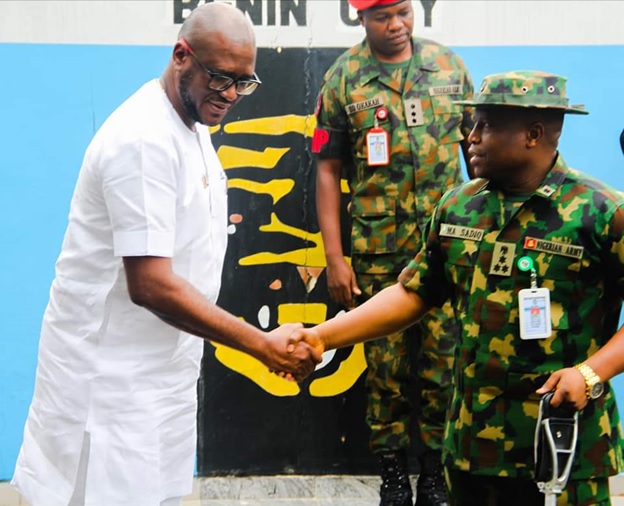 This is in continuation of its drive for an effective and efficient tax administration as the EIRS boss said “The visit is premised on the backdrop of the need to reconnect with key agencies of government such as the Nigerian Army, in recognition of the very critical role of protecting the integrity and safety of the Federal Republic of Nigeria and its constituent parts against foreign and domestic threats.”

He noted that “The survival of the country economically, is the ability of the States to mobilize independent revenue of government.”

Suing for collaborative support of the Brigade Commander at ensuring an effective and efficient tax administration process, Inneh canvased for a robust synergy between both institutions to enhance the Service field operations by ensuring a hitch free access to public and private establishments under military protection, for tax compliance and audit purposes.

Citing cases of illegal collections in the transportation sub-sector, particularly on our roads by unauthorized persons and non-state agents of government as robbery, and bane to a healthy revenue generating system, the revenue boss harped on a robust strategy to decisively deal with the ugly situation in order to protect unsuspecting members of the public against being victims.

Inneh informed the Brigade Commander of the bold initiatives taken by the Revenue Service to making tax administration seamless for taxpayers in Edo State through the deployment of IT solutions- the Edo Revenue Administration System (ERAS), with which taxpayers can use to conveniently pay their taxes by instalments against their personal profile rather than wait till end of year.

He called on the Brigade Commander to assist the Service in its drive at ensuring all taxable persons are brought into the tax net particularly wives and relatives of army personnel engaged in economic activities.

Brigadier General Musa A. Sadiq assured of the brigade’s support and collaboration towards the operations of the Revenue Service.

He noted that “The roles played both by the Nigerian Army and the EIRS, are very critical as it is mutually beneficial to the security, economic, social and infrastructural development of Edo State.

“Personnel or relatives of the military engaged in businesses outside military barracks are not exempted from paying due taxes to government. This can best be understood and sustained by sensitization and awareness activities.”