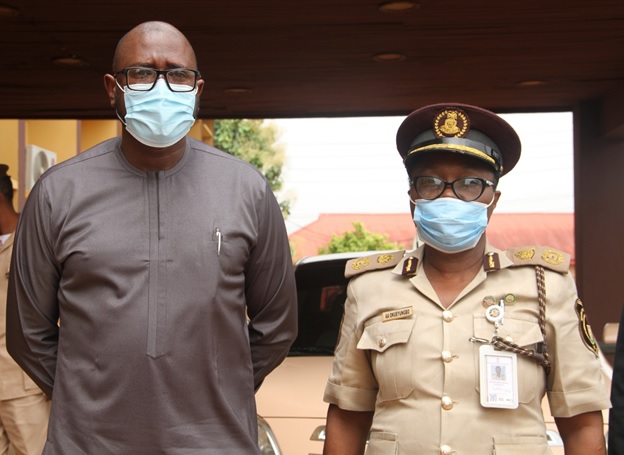 Inneh who came with his team of Executive Directors and top management staff on the visitation, harped on the need for partnership by both establishments of government which incidentally are both members of the Joint Tax Board (JTB) through sharing of requisite data and documentation, capture of expatriate returns, and Pay As You Earn (PAYE) details to plug tax leakages.

Briefing Comptroller Augusta Adesola Okueyungbo during the courtesy visit to her office, Inneh stated, “The Nigerian Immigration Service is very critical, in the entire process of documentation and management of the entry and exit point of people and critical in the supply and control of expatriate memo as far as Nigeria is concerned.”

Stating that the immigration service was strategic at helping government to plug loopholes and leakages, he harped on the need for adequate, “Compliance with annual filing requirements since EIRS and the Nigerian Immigration service are partner institutions hence the need by staff to file their tax requirements as and when due and also, the need to ensure that the remittances of Pay As You Earn (PAYE) which are taxes deducted from earnings of your personnel are  properly remitted to the coffers of government.”

He stated that same thing applied to Withholding Taxes which relate to enterprises and individuals who do business with the Immigration service. This, administratively he said, had to do with the monthly expatriate returns of companies who employ expatriates to do businesses in Edo State whom are required as a matter of law to file.

He nonetheless lamented, “A lot of these companies do not file these monthly returns. They mostly manipulate the entries to claim/show they have ten expatriate staff to fill the quota they have applied for. There are entry and exits; they simply substitute the names. They don’t go through that process which they are supposed to follow in a number of instances. They are supposed to fill a deletion list. Instead, they simply takeout the names of those who have exited and introduce a new list. It is something we must discourage.”

He noted that aside taking our Immigration and regulation laws for granted, there was need to track migratory patterns of those who have been approved to work in the country.

The Comptroller, Nigerian Immigration Service, Edo State Command, Augusta Adesola Okueyungbo while affirming to a symbiotic relationship with sister organizations and stationing it’s personnel (DRs) in the eighteen local government areas of the state for effective discharge of duties promised to deliver stated requests of the EIRS to her superiors.